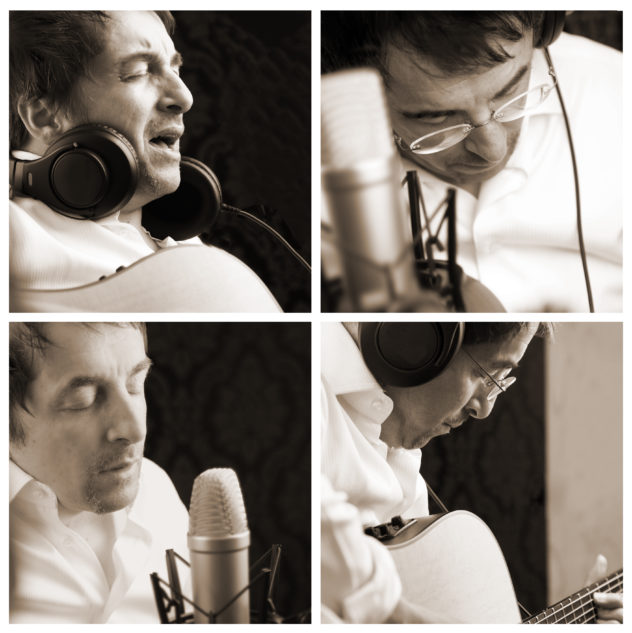 As a teeny Massimo got his first guitar and since then he played in various bands.
Massimo began to write his own songs at an early age. “When I write a song the most important for me is the tone, the sound of a word so that I can merge it with the melody. First comes the melody and the sound, then the lyrics, ”explains Massimo, who writes and sings his songs only in English language.

When writing songs Massimo always thinks of the color palette of a painter: “Even the smallest blob of another color mixed on the palette forms a new, sometimes unexpected, unique color tone and thus creates a completely different mood. The color palette corresponds to my guitar and vocals. “
Massimo was inspired by musicians and bands such as Led Zeppelin, the Beatles, Queen, Johann Sebastian Bach, but also by many Italian songwriters.

How does Massimo sound?
Well one can say aside the mainstream folk music. Massimo’s songs do not have the usual verse-chorus scheme: He combines his virtuoso guitar playing and melody lines to form a harmonious whole. In conjunction with folk, pop and jazz elements produces that a melodious musical mix. But the best way to get an idea of ​​him is to listen to his music.

Where does Massimo get his song ideas from? “Well I grew up in Italy and the radio was on all day. Maybe that melodies and sounds combine in my brain new musical ideas. They are certainly influenced by Eros Ramazzotti or Adriano Celentano. ”At his grandparents house Massimo could hear The Beatles all day – his uncle is a die-hard Beatles fan. But also musicians like Johann Sebastian Bach and bands like Led Zeppelin inspire him a lot.

Numerous domestic and foreign listeners love his music. His Twitter account already has over 27,000 followers. Massimo is planning further concerts for 2022- solo and with various guest musicians..

Scroll Up
We use cookies on our website to give you the most relevant experience by remembering your preferences and repeat visits. By clicking “Accept All”, you consent to the use of ALL the cookies. However, you may visit "Cookie Settings" to provide a controlled consent. Mehr lesen
Reject AllAccept All
Manage consent

This website uses cookies to improve your experience while you navigate through the website. Out of these, the cookies that are categorized as necessary are stored on your browser as they are essential for the working of basic functionalities of the website. We also use third-party cookies that help us analyze and understand how you use this website. These cookies will be stored in your browser only with your consent. You also have the option to opt-out of these cookies. But opting out of some of these cookies may affect your browsing experience.
Necessary immer aktiv
Necessary cookies are absolutely essential for the website to function properly. These cookies ensure basic functionalities and security features of the website, anonymously.
Functional
Functional cookies help to perform certain functionalities like sharing the content of the website on social media platforms, collect feedbacks, and other third-party features.
Performance
Performance cookies are used to understand and analyze the key performance indexes of the website which helps in delivering a better user experience for the visitors.
Analytics
Analytical cookies are used to understand how visitors interact with the website. These cookies help provide information on metrics the number of visitors, bounce rate, traffic source, etc.
Advertisement
Advertisement cookies are used to provide visitors with relevant ads and marketing campaigns. These cookies track visitors across websites and collect information to provide customized ads.
Others
Other uncategorized cookies are those that are being analyzed and have not been classified into a category as yet.
SPEICHERN & AKZEPTIEREN